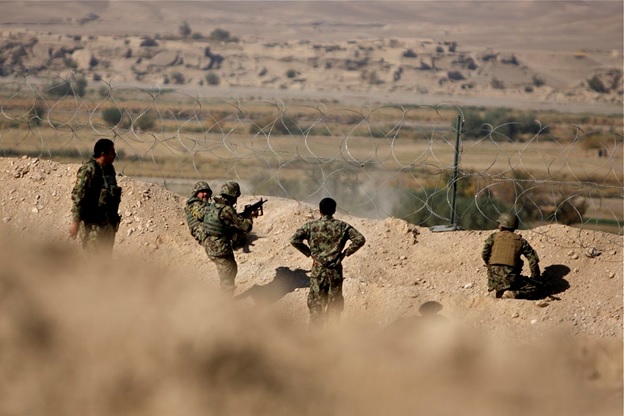 The Taliban are continuing to fight heavily with Afghan-led peace talks, elections anticipated in the war-torn land. U.S. continuing to monitor civilian situation in the long war while it has reduced operations in the country by 80 percent.
KABUL, Afghanistan - Amzeal -- The Taliban continue to fight heavily in Afghanistan as the election approaches, and disregards peace efforts led by the Afghan government.

The U.S. is continuing to monitor the situation in the long war while it has reduced combat operations within the country. There are about 20,000 coalition forces actively engaged in the war in Afghanistan today, which is an 80 percent decrease from the start of the war.

Taliban are scoring many civilian casualties as they are more powerful which allows them to carry out big attacks in the war-torn country including in the city of Kabul.

Recently, the insurgency stormed a hotel in Kabul, killing about 60 wedding guests and injuring over 100 others in the latest attack.

More on Amzeal News
The U.S. peace deal with the Taliban that could enter the ninth round has yet to address the civilian casualties and the greater peace situation.

Today, because of insecurity, women are still unable to work in Afghanistan and many schools have been bombed or closed in rural areas.

Saleh called on the authorities to investigate who is financially supporting the Taliban and to find the source. He criticized the government of Pakistan and called for a crackdown on Taliban sanctuaries.

The US government has yet to find a way out of Afghanistan, and the public is not supporting further US involvement in Afghanistan despite President Donald Trump's increased budget.

The Afghan election is expected to be held next month while Taliban ignores the constitution and flag of Afghanistan. President Ghani does not see peace with the Taliban due to his government delaying such talks with the insurgent group.

Written by Meladul Haq Ahmadzai an Afghan-Canadian peace activist who lives in Canada.