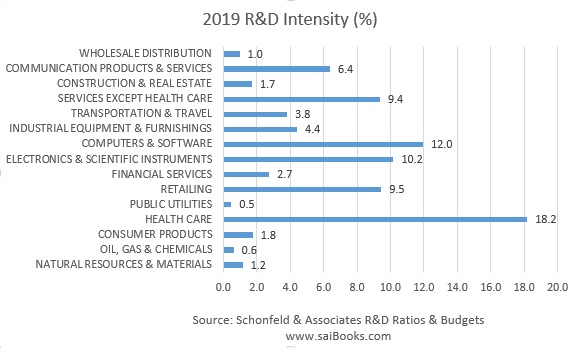 VIRGINIA BEACH, Va. - Amzeal -- According to a newly released study from Schonfeld & Associates, Inc., R&D Ratios & Budgets, now in its 44th annual edition, the pharmaceutical industry continued to be the biggest R&D investor in fiscal 2019 with budgets of drug companies increasing by almost 4% to over $132 billion. Software companies continued to contribute a total of over $62 billion to this investment pool.

The biggest single R&D investor in 2019 was Amazon at over $37 billion, followed by Alphabet at $26 billion, Microsoft at $19 billion, and then Apple at $16 billion. Firms involved with digital content are investing much more heavily than those in more traditional arenas.

Pharmaceutical firms continued significant R&D spending in 2019. Johnson & Johnson, the top spender at $12.2 billion, is followed by Merck, Novartis and Pfizer, each spending over $8 billion. The biotech industry, led by Gilead Sciences, grew R&D by over 34% to over $23 billion. Electromedical apparatus makers, led by Medtronic, spent a total of over $3 billion, an increase of just under two percent.

More on Amzeal News
R&D budgets of semiconductor makers grew to over $48 billion, an increase of 5.7%. Intel had the largest R&D budget, $13.3 billion, a slight decrease from 2018. R&D budgets of the industries that are major suppliers to the infrastructure of the Internet cloud also have increased R&D spending.

The 2019 R&D spending of the automotive industry, led by Toyota, Honda and Ford each spending over $7 billion, was essentially flat from the 2018 total as was industry revenue.

R&D Ratios & Budgets contains fiscal 2018 and 2019 R&D spending, 2019 revenue and 2019 R&D intensity ratio, as well as 2018 and 2019 annual growth rates in R&D spending and sales for over 2,400 firms. Over 280 industry summaries of the same information are provided. The study reports for each company a low and high value for the R&D-to-sales ratio (also known as R&D intensity) for the last five years to indicate stability of R&D spending.

The 2020 edition of the PDF report is $ 395 and the report along with Excel datafiles is $ 495. Contact Schonfeld & Associates, Inc., 1932 Terramar Lane, Virginia Beach, VA 23456. Call for more information: 800-205-0030 or visit the company's web site for immediate download at www.saiBooks.com under Area of Expertise: Research & Development Spending.