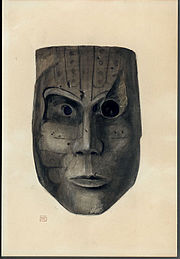 Ceremonial masks dug up by archeologists provide insights and inspiration for literary treatment of coping with the hardships of the 2020s
MARCO ISLAND, Fla. - Amzeal -- February, 1896
Long before invaders to the new world brought the pestilence that eventually were their downfall, indigenous people were discovered to be ardent mask-wearers not out of fear of contracting a fatal disease brought to their shores, but to pay homage to living creatures that were an important part of what they believed to be a shared natural environment.

The discovery was made at an archaeological site consisting of a large shell works island next to Marco Island, Florida. A pond, called the "Court of the Pile Dwellers," was excavated in 1896 by the Smithsonian Institution's Pepper-Hearst Expedition, led by Frank Hamilton Cushing, who recovered more than 1,000 wooden artifacts, the largest number of wooden artifacts from any prehistoric archaeological site in the eastern United States representing some of the finest prehistoric Native American art in North America.

More on Amzeal News
The Smithsonian recently loaned some of the artifacts to the Marco Island Historical Museum for its extensive exhibit of Pre-Columbian Native American art and culture of the once-thriving indigenous peoples of Florida.  The ceremonial masks are believed to depict various species of wildlife that were an important aspect of life to Florida's ancient peoples.

One of the recovered relics was a ceremonial mask ("Man Bear") painted by on-site artist Wells Sawyer.  The image of the mask is part of a collection maintained by the Smithsonian Institute, and was the inspiration for The Mask of the Ancient Ones, a talisman of sorts that appears throughout the novel 20/20, and served as the basis of an award-winning carving of Man-Bear by artist Evelyn Dales adorning the cover of the book.
https://www.youtube.com/watch?v=bs_g1k-6zmk


In 20/20, novelist B Shawn Clark depicts the struggles of a boy and his family living through Steinbeck-like economic privation amidst environmental cataclysm in the 2020s.

More on Amzeal News
Written from the point of view of the boy as an old man living in the future, the book describes with almost eerie prescience the changing world of today – a place where people must come to grips with economic and environmental hardship that forces them to confront what is not a dystopian world of the distant future - but of upheaval experienced by us, now, in the present.

The Mask of the Ancient Ones becomes an important symbol to the characters in the book – a reminder of the past as well as a source of comfort - to the people who must learn to band together to survive in our shared world.
https://www.youtube.com/watch?v=Y12-Y_r1Zcc

20/20, if not the "book of the year", is surely a book everyone will find worth reading this year, and for years to come.