Perihelion Engineering - The Universe in a Nutshell $29.95 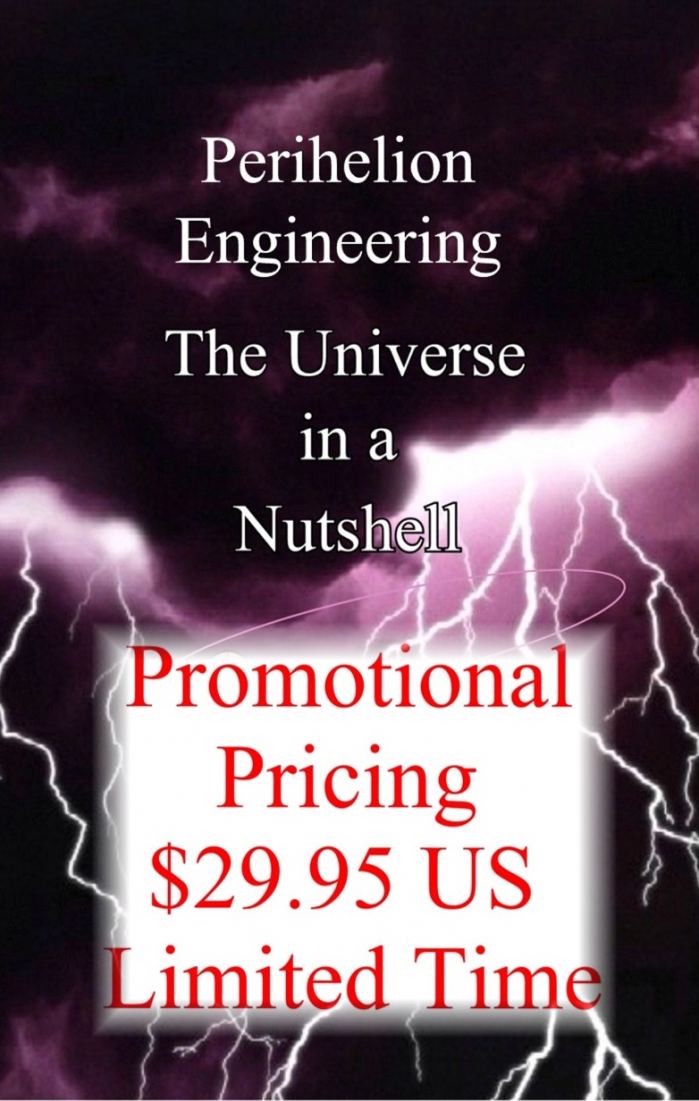 Limited Time Promotional Price - Professor Brainstein Presents on You Tube suggested the need to extend the reach. Now for a limited time thanks to channel help and all the assistance special pricing is available. Full color exposé is costly but necessary for this publication.
CINCINNATI - Amzeal -- Special Pricing - Perihelion Engineering, 'The Universe in a Nutshell' is the most important publication of the twenty-first century. TJ Ginn breaks the bonds of traditional physics to redefine long accepted norms.

Causality and the Big Bang theory are refuted. The velocity of light is proved to not be fundamental. Combustion and thermodynamics is taken to new horizons and the magic of magnetism is revealed to be push and not pull as well as gravity being shown to be pressure and not a magic unsolvable mystery attractive force.

More on Amzeal News
For the first time in science history, dark matter is defined, as well as the red shift observation refuted, to support Albert Einstein's original proposal that the universe is infinite.

The unified theory is here… "The universe is in a Nutshell and the Nutshell is infinitely large."

The 'Universe in a Nutshell' breaks from physics conventions for a new viewpoint. The problem with our science is that it is much like the old adage – 'a man was looking in his yard in the evening. His neighbor asked him what he was looking for. "Why, I am looking for the keys to my car." The neighbor helped him and after a while he asked, "Is this about where you lost them?" The man replied, "no, I lost them in the house." Dismayed the neighbor asked, "Then why are you looking out here?" The man replied, "Because the light is better." This is my version of 'The Streetlight effect' and it is prevalent even today.

Our observations are always evolving and as in the days of Nicolaus Copernicus we learned our observational error and we saw the earth truly going around the sun. We have failed in so many aspects with the Big Bang view. It is totally wrong primarily because the speed of light is not fundamental.

More on Amzeal News
"I apologize for the high cost of printing, but it is a full color exposé, which is essential. I am not accustomed to apologizing ahead of a release, but I am trying to put this in the hands of everyone. Though I tried to write this for even the non-science acclimated reader some complexities were unavoidable. Suffice it to say, though the universe is simple, infinity is not."
June 23, 2020 Promotional Pricing Campaign Save $5 now $29.95