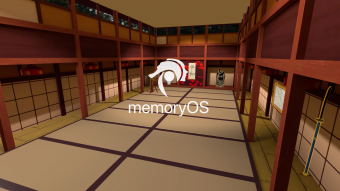 memoryOS reinvents the way we memorize and combines two aspects – a magical 3D world that requires no prior gaming experience and interactive bite-sized micro lessons – in one single app. memoryOS introduces a modern approach to memorization based on hundreds of lessons and your very own Mind Palace, which will serve as your long-term memory storage. Making memorization skills easy and joyful to master.

"We have combined proven memory techniques with the latest advances in e-learning and an immersive 3D game to create an effective tool for learning memorization skills"
– stated in the Kickstarter description.

memoryOS is an edtech startup developing an innovative gamified e-learning app to help people significantly improve their memory in an enjoyable way. The bite-sized lessons of the app's e-learning component are compiled and taught by The 2X World Memory Champion, Jonas von Essen who has recently memorized the first 100,000 digits of Pi and has proven how a person with ordinary memory can "rewire" their brain and turn it into a "memory machine".

More on Amzeal News
The patent-pending game component of the same app provides the user with pre-made virtual environments (i.e., Mind Palaces) for encoding and storing the necessary information. The effectiveness of the Mind Palace technique has been proven by memory masters since the days of Ancient Greece and is also demonstrated by the protagonist of the "Sherlock" BBC TV series.

"What is terrific about these memorization skills is that anyone can learn them, at least to a substantial degree. Without the need of having any sort of mythical photographic memory."
– Jonas von Essen, Memory Grandmaster and Co-founder of memoryOS.

That is why, together with the memoryOS team, Jonas is putting a lot of effort into making the world remember by creating mind-changing memory software available to people all around the world. An easy-to-use and effective app is the result of that vision.

This ongoing mission brought memoryOS into a friendship with The Stephen Hawking Foundation and many prominent groups; they recently began the hugely exclusive process to implement OpenAI's GTP-3 and Dall-E into their learning platform to create high-value text and image content for lessons, exercises, and practical use with the help of AI. Becoming more than just an app.

"Prior to Kickstarter, we had 33,000 people in their Early Adopters community. For those that have tried the memoryOS demo, the average improvement in recall increased by 70%, with an average increase in recall speed by 60% just after one relatively short demo session."
– Alex Ruzh, CEO and Co-founder of memoryOS.

The memoryOS team believes that memorization is as essential as reading and writing and should be taught as our base skill. The current educational system lacks to do so – this leads to a lot of student stress and normally progresses into various forms of what's called "having a bad memory." The general "if you don't use it, you lose it" principle applies to our memory just as well. The more memoryOS develops, the better the ability to offer the product at very little to no cost for young learners worldwide. This is an important goal - to make memoryOS available to all.

More on Amzeal News
This project began from one of the co-founder's pains when he realized how unnecessarily stressful his life was during the test and exam periods at school and university. Even though having a Mind Palace significantly boosted his grades and free time, Alex Ruzh saw that existing methods of obtaining memorization skills have significant limitations that stop almost everyone from acquiring it as a lifelong skill. Continuing to feel the unnecessary pain of scholars, students, and people in general, he decided to find a solution and build a team to implement it.

"Thanks so much for letting me know at an early stage about your App. The uptake on pledges is amazing and just proves what I have believed all along: that the marriage of memory techniques and software is the future of learning."
– Dominic O'Brien. Eight-time World Memory Champion and Best-Selling author of 13 books on memory.

Startup's first investor and advisor: Bas Godska, rated #1 Dutch Angel Investor (Crunchbase). Startups where he invested (pre-)seed are now jointly worth over $8 billion. Dr. James Bowen who is a serial entrepreneur, author, professor, and creator of the Startup Canada entrepreneurship award is also on the advisory board. There are ten people working on the project, and the team plans to expand further.