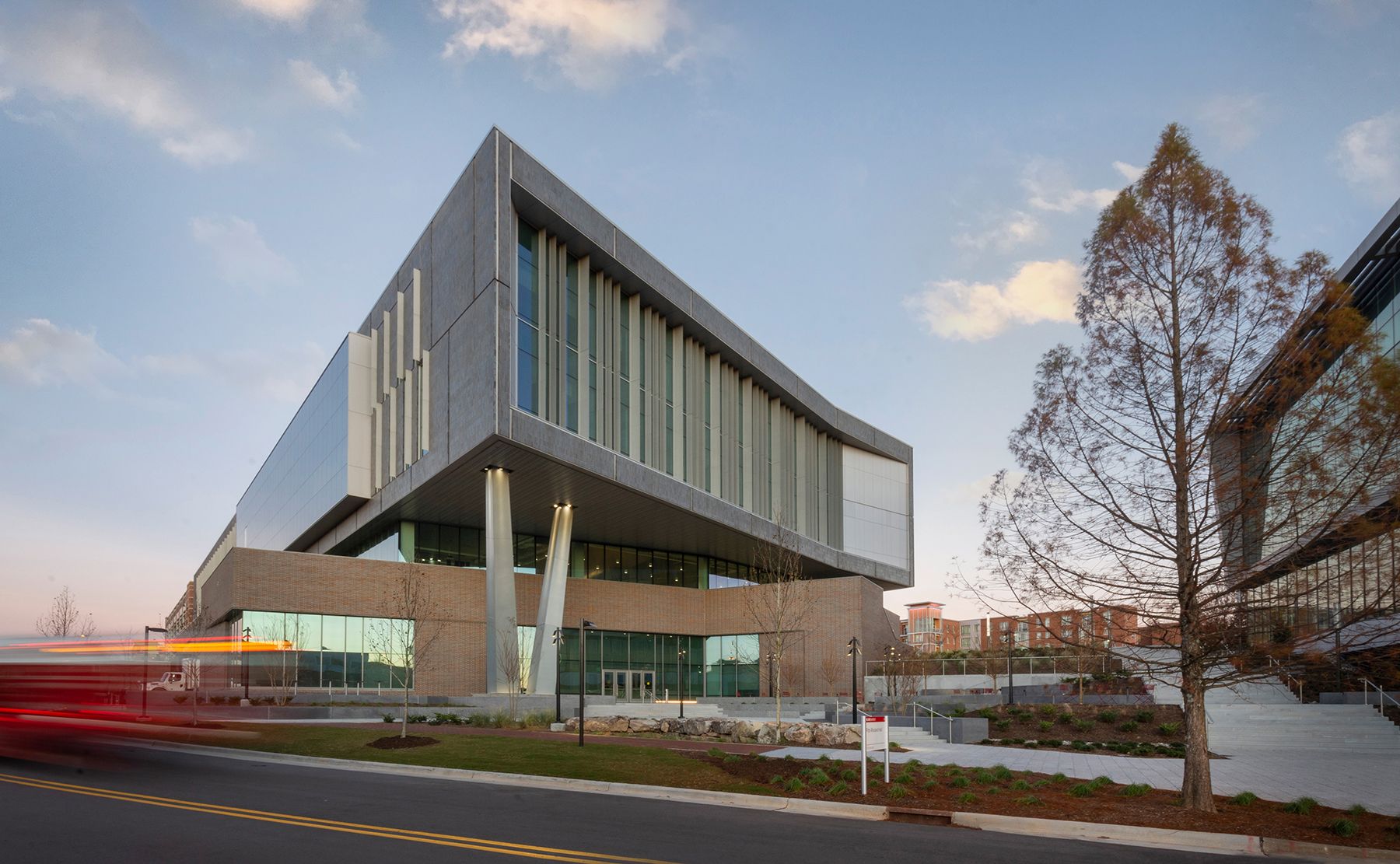 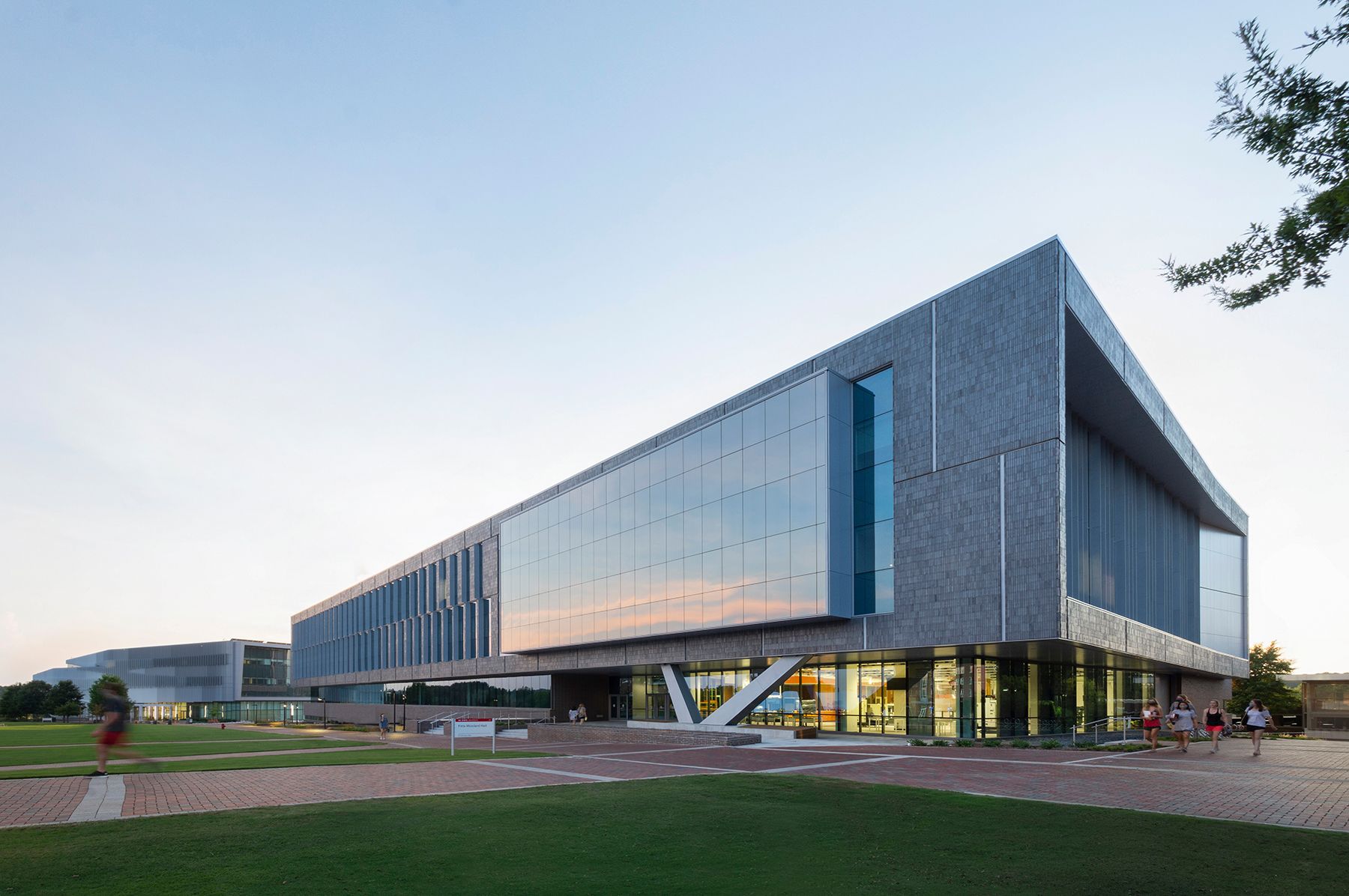 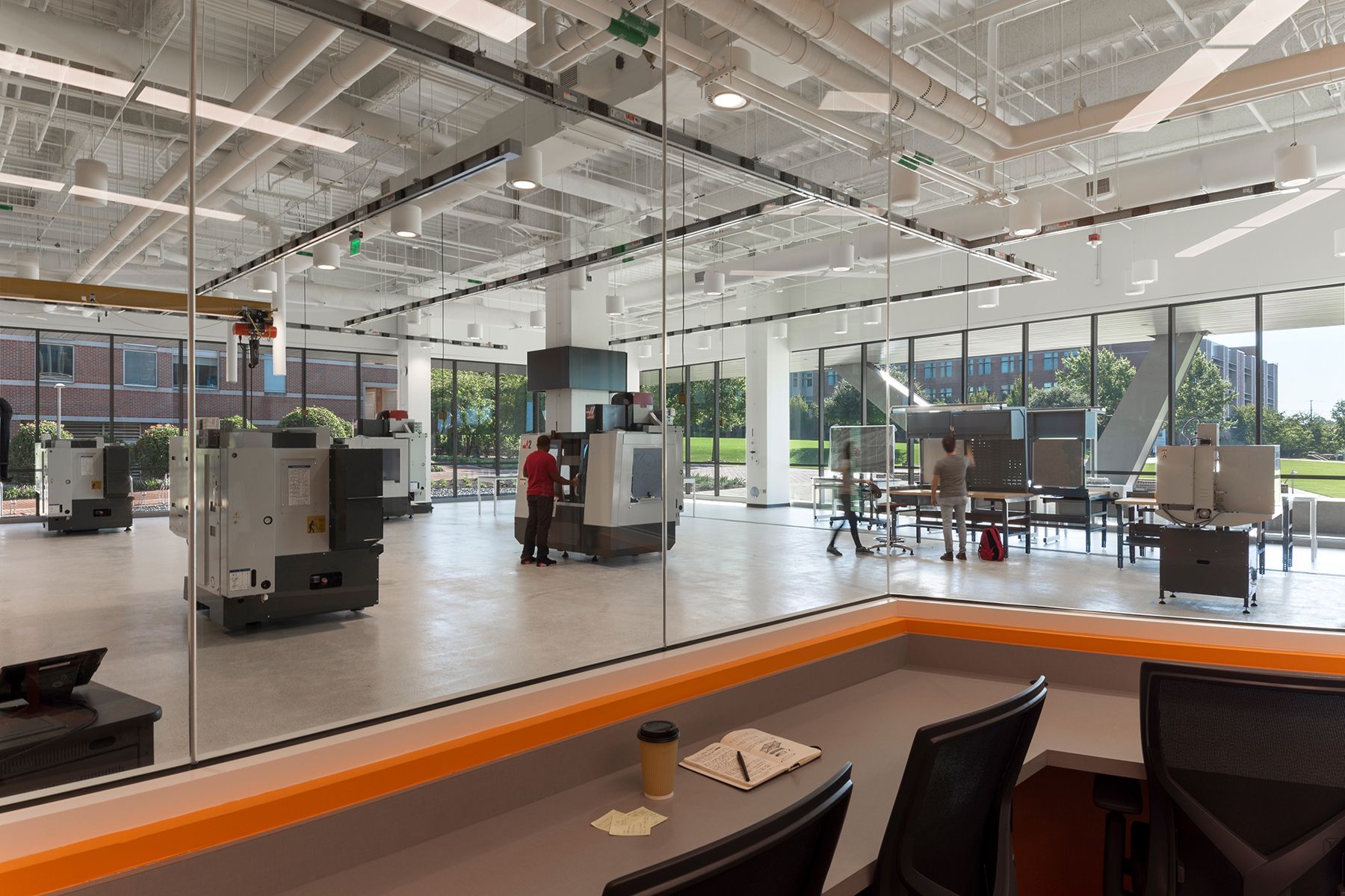 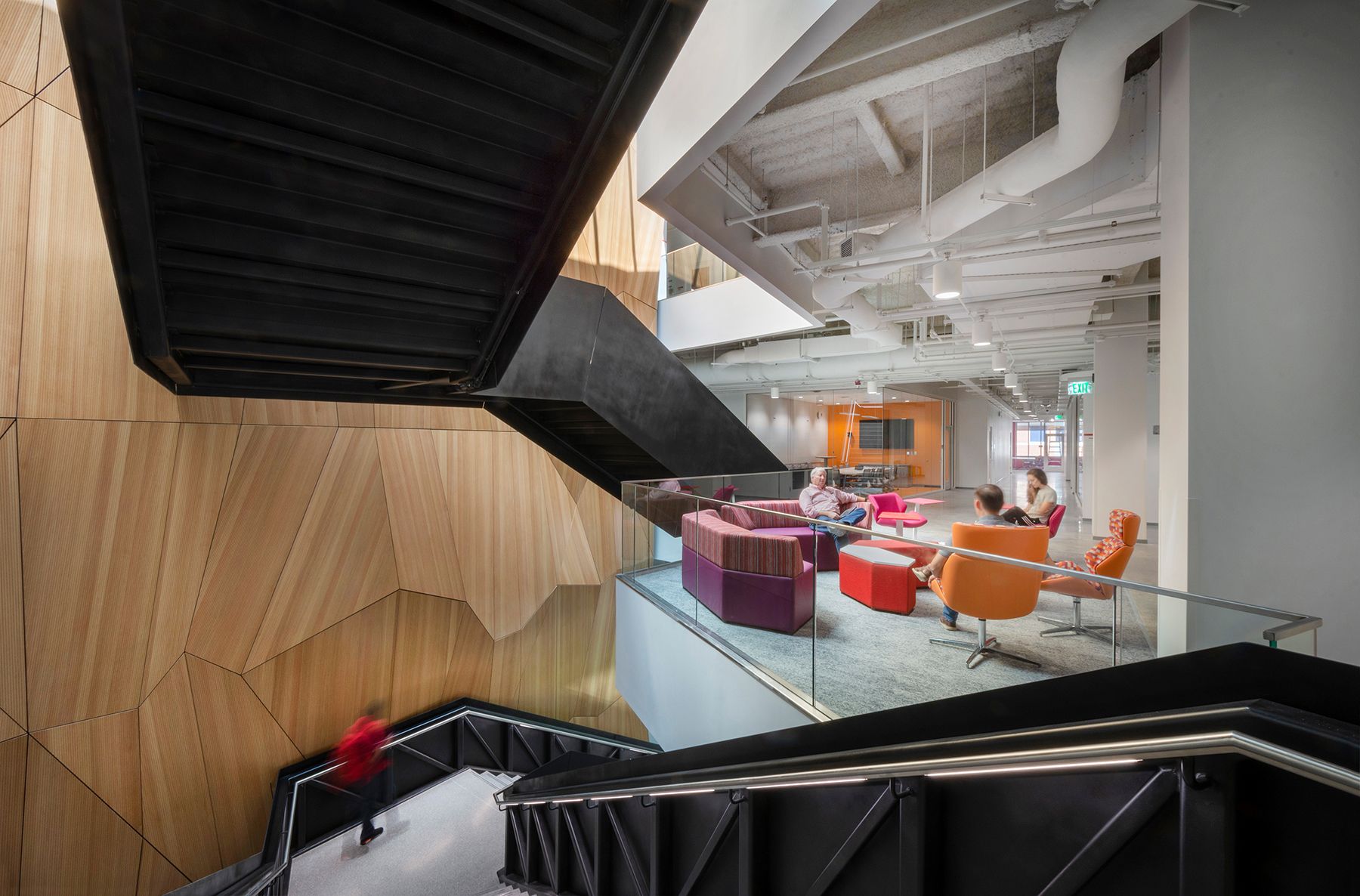 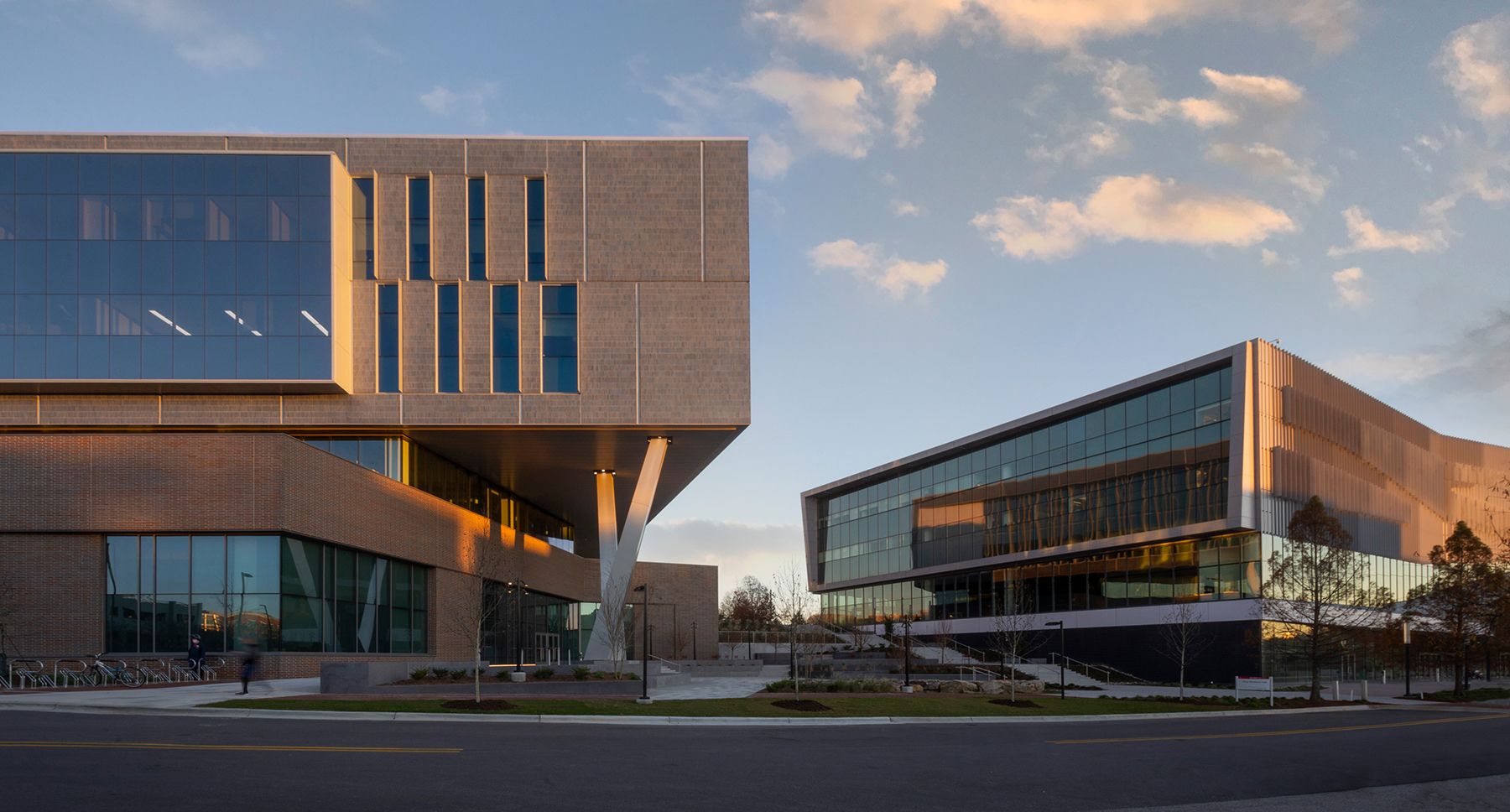 Fitts-Woolard Hall design focuses on transparency and engineering on display
RALEIGH, N.C. - Amzeal -- Clark Nexsen has completed Fitts-Woolard Hall on Centennial Campus at NC State University in Raleigh, North Carolina. The $150 million engineering building is the embodiment of Think and Do, the university's mission statement connecting thought and action. As the architect and engineer, Clark Nexsen partnered with NC State to design the 225,000 square foot facility. The new building is intended to support multidisciplinary instruction and research while fostering collaboration between students, faculty, and individual engineering departments.

The design emphasizes transparency and "engineering on display." Extensive use of glass allows daylight to penetrate into the four-story building. The transparency into these spaces offers glimpses of cutting-edge research and allows the school to showcase its ongoing work. Throughout the facility, structural elements and building systems are revealed as an additional instructional tool.

More on Amzeal News
The south entry is flanked by a structural testing lab, senior student project space, and large-scale driving simulator visible to students and visitors from within and outside the building. These hands-on, investigative spaces enable civil and structural engineers to test theories, calculations, and materials.

With more than 100 classrooms and state-of-the-art laboratories, Fitts-Woolard Hall consolidates the Department of Civil, Construction, and Environmental Engineering and the Fitts Department of Industrial and System Engineering under one roof. The new engineering building is the final move to unify the school's College of Engineering on Centennial Campus.

Ranked among the top 25 U.S. engineering programs, NC State is a powerful driver of economic impact in North Carolina and beyond. In the past 10 years, engineering undergraduate enrollment at NC State has grown by 22 percent, and graduate enrollment has more than doubled. Fitts-Woolard Hall provides an innovative facility to help accommodate that growth and further position NC State University as an international leader in engineering education.

More on Amzeal News
Fitts-Woolard Hall is the first public-private partnership by the university to fund the construction of an academic building. Half the cost came from public funds through a 2016 state bond referendum. The remaining half has come from private funds, including a $25 million joint gift from alumni Edward P. Fitts Jr. and Edgar S. Woolard Jr.

The new building is positioned to the north of the James B. Hunt Jr. Library, designed by Snøhetta and Clark Nexsen, and completed in 2013. Skanska was the construction manager at risk for both projects.

Due to the pandemic, the NC State Engineering Foundation is delaying in-person events centered around the building grand opening and is planning to host them during the spring 2021 semester.