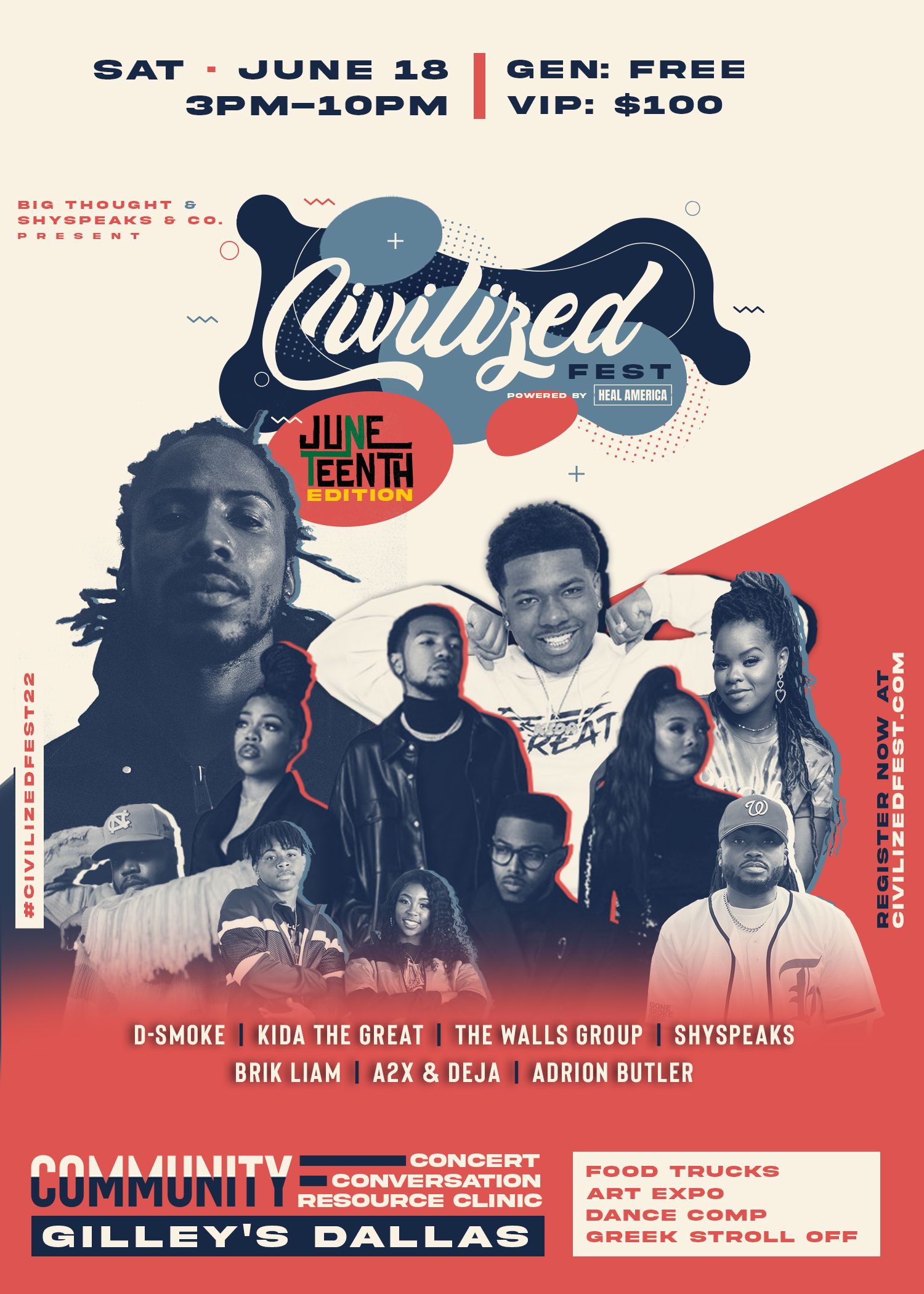 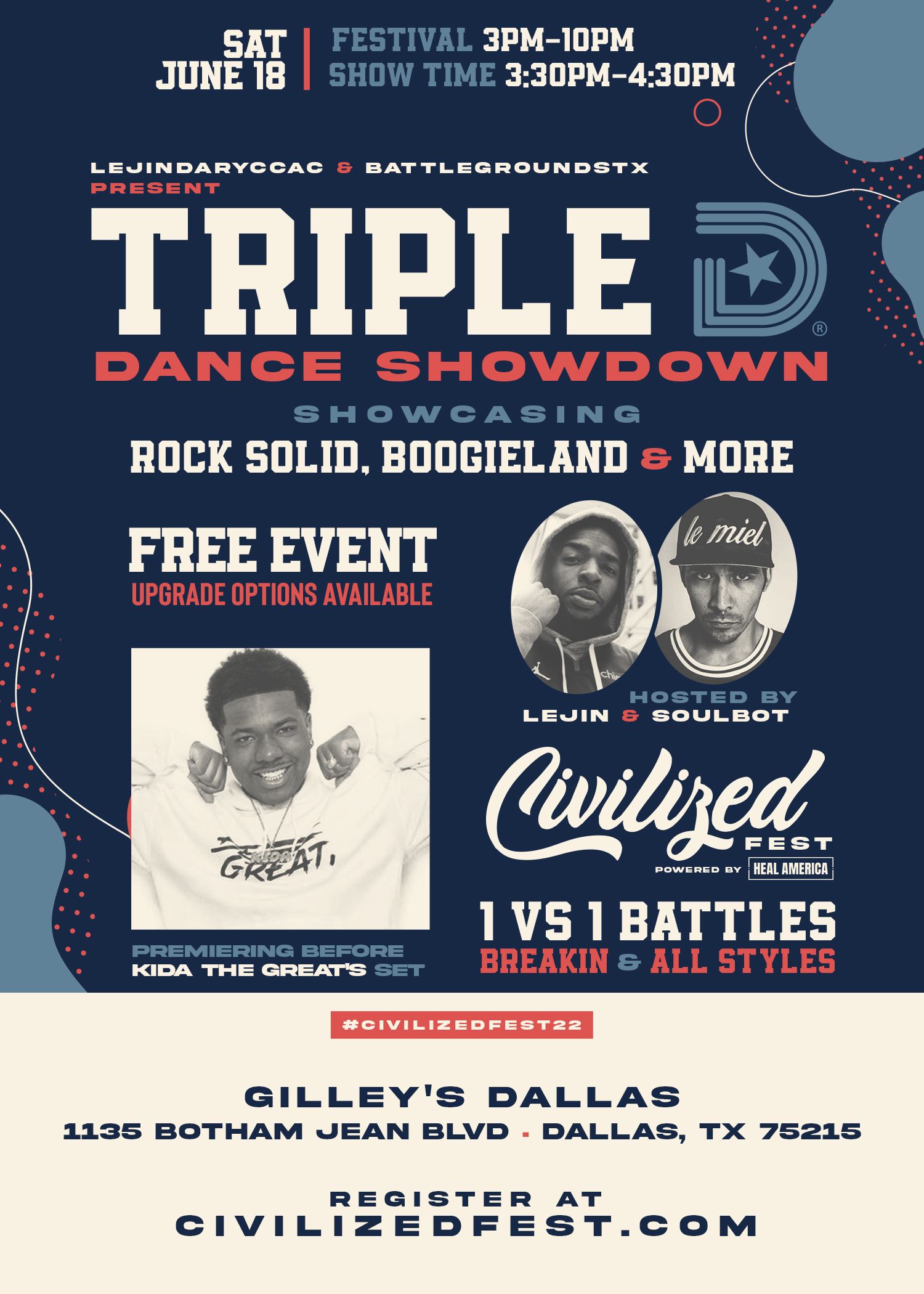 DALLAS - Amzeal -- Dallas lyricist and American hip hop/spoken word artist, ShySpeaks (AKA Shy Amos-Powell), has graced the stages of many, alongside notable creators such as Ludacris, Jeezy, Tye Tribbett, Kirk Franklin,GRAMMY award-winning artist Bun B and countless others. This time the indie artist is hosting her own festival right here in her hometown at Gilley's Dallas on Saturday June 18th.

Empowered by the movement that took place in 2020 after the senseless murder of George Floyd, Shyspeaks created the Civilized Drive In Concert and Conversation to use her voice to galvanize her community to become more civically engaged. The event last year was such a success that Big Thought decided it should be turned into a free one day community event that not only moves the conversation forward but also connects the community to resources and showcases some of their talents. Heal America, a non profit organization founded by the late Bishop Omar Jahwar, was presented with the opportunity to come alongside and they enthusiastically accepted.

More on Amzeal News
"Heal America is committed to collaborating with like-minded individuals to fight for racial justice with love and redemption. ShySpeaks exudes all attributes identified as a key ambassador to assist in moving this mission forward.  With her as the thought leader of this event, we witnessed the effort to empower others to empower themselves and discovered the vision of Heal America aligned with the vision of Civilized Fest," said Fayth Jefferson, the Heal America Community Engagement Liaison.

The Civilized One Day Fest: Juneteenth Edition will be an action packed event that features a dance competition, art exhibit, community resource center, vendors and musical performances by Grammy nominated winner of Netflix's hit hip-hop competition show, Rhythm and Flow, D. Smoke, global dance phenomenon, Kida Tha Great, gospel sensations, The Walls Group. They will be preceded by several Texas based artists Brik Liam, A2X and Dejah and Adrion Butler. The day portion of the event will be hosted by local Dallas Boutique Owner, Princess Pope and Chadd Black, founder & CEO of Spinmatic Records will be hosting the evening portion.

More on Amzeal News
The award-winning Hip Hop and Spoken Word artist presented this vision to Big Thought non profit organization two years ago, with no idea that it would result in a continued partnership.

"Big Thought is excited about co-producing another Civilized  because we've missed our community. The pandemic shined an even greater light on how much we, as people, need each other for support, learning and, most importantly, joy. Civilized Fest is celebrating the resiliency of our community and embracing the joy we give each other while learning about how we can be our greatest resource. We're just honored to be a part," stated Sean Walker, manager of TFI Dallas at Big Thought.

Civilized Fest will be held on June 18th, 2022 at Gilley's from 3PM to 10PM CDT. General admission is free for everyone and a VIP upgrade is $100. Tickets for the event can be purchased online via https://civilizedfest.com/