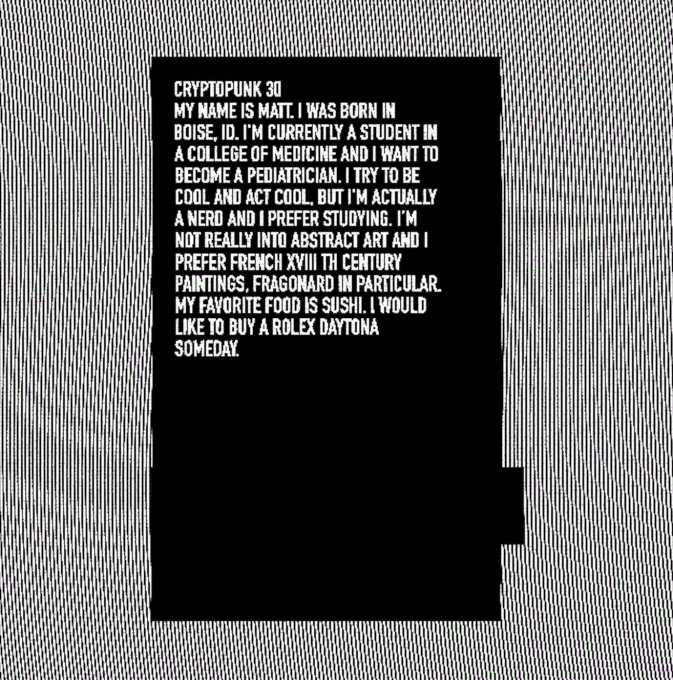 Five NFT's from Gervois' series "The Inner Life of Cryptopunks" will be shown. Each work imagines the secret life of the iconic cryptopunks, with their doubts, regrets, and painful life experiences.

More on Amzeal News
Pierre Gervois gained recognition with his NFT series "The Appearance of Respectability", which sold out in two weeks in May 2021 on the Tezos blockchain.

In his series "MARS", he explored the dynamics of power in the future Martian colonies, and more recently in his deeply ironic series "Random Homo Sapiens", he analyzed the simple act of touching a man's cheek with one's hand.

Considered by art curators as one of the leading artists using language in his visual work, Gervois recently exhibited his series "Income" in the inaugural crypto-poetry gallery The VerseVerse, created by three leading poets: Sasha Stiles, Ana Maria Caballero, and Kalen Iwamoto.

As Pierre Gervois said "Crypto art is the future of art. When the next generations will travel in space and explore other planets, space travelers will not carry physical artworks in their spaceships. They'll have NFT's with them."

The inaugural exhibition of Metavirtual will happen on Dec 3, 2021 during Art Basel Miami Beach.