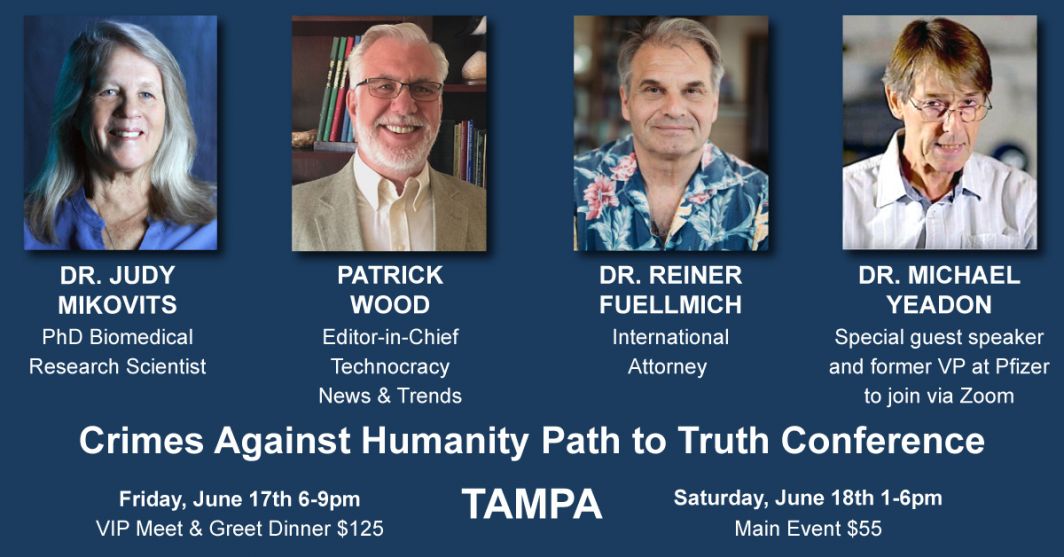 This launches their first in-person event to educate and engage the public in efforts to build the case for indictments against those responsible for the current crimes against humanity being enacted on a global level. Joining them live via Zoom for Q&A will be guest speaker Dr. Michael Yeadon, former VP at Pfizer.

Patrick Wood sets the historical context asking the question - how do scientism, technocracy and transhumanism serve as the blueprint for what is happening today? From our denial of natural immunity to the infiltration and control of our economic and governmental systems, technocracy has been at play for decades prior to its manifestation in today's current global crisis. From his 40+ years of research, Patrick Wood lays the foundation for the fabric of social engineering that has allowed these predators to enact these illegal and criminal measures on a global scale and how we can reclaim our sovereignty through clearly understanding their manipulative and controlling measures.

More on Amzeal News
Dr. Judy Mikovits presents the fraud in the scientific and medical literature detailed in her books. She also details the government and Fauci's role behind her arrest and career destruction which is now a daily occurrence for truth tellers striving for unity and an end to this four-decade long plague of corruption.

Dr. Reiner Fuellmich shows us where the legal proof can be found and how the jury of the public will play a role in these indictments. How and where are these crimes being committed? With expert testimony of nearly 400 scientists, doctors, lawyers, journalists and public officials, Dr. Fuellmich shares a summary from the expert testimony of the Corona Investigative Committee's grand jury proceeding by the peoples' court of public opinion and alongside Mikovits and Wood helps us understand the setup, the scientific evidence and the fraud behind the coordinated and intentional actions that have resulted in mass injury, death, and destruction on a global scale.

More on Amzeal News
To attend event or the VIP dinner https://pathtotruth.ticketleap.com/path-to-truth-conference/

Reference Links for the Crimes Against Humanity Task Force can be found at: