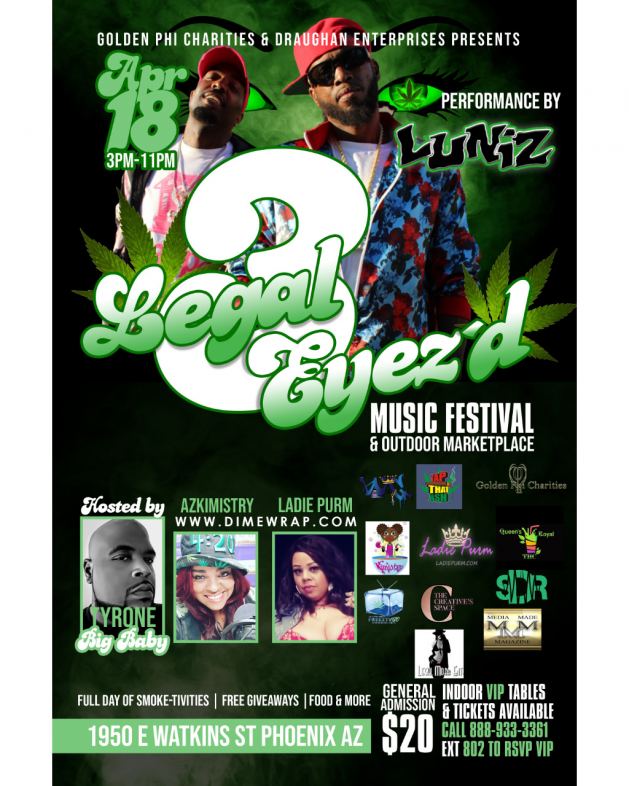 Legal Eyez'd 3, created to celebrate, entertain and educate patrons about the recently passed proposition for adult consumption, is set for April 18th, fusing an eclectic mix of food and product vendors with 420 inspired musical artists featuring headlining act The Luniz known for their classic hit "I Got 5 on it".
PHOENIX - Amzeal -- The Legal Eyez brand has been appropriately renamed and reinvented as LEGAL EYEZ'D 3 in recognition of the passing of prop 207. This is the 3rd installment of the series and is the brainchild of Kim Draughan, aka "AZKimistry "and Brandi Caudell, aka "Queen Ladie Purm" The inaugural music festival, in 2014 was the first time this duo united to produce and co-host a 420 themed event. The two opted to host the event on April 20th, a significant date in the "420" community which also happened to fall on Easter Sunday , earning the event recognition from ABC15 local news. The event, was created to motivate the public to pass MMJ legalization in Arizona by combining local musical performances, political activists and guest celebrity headliners such as the late Mikel Weisser (former Arizona State Director for NORML ) and comedian Dwayne Mooney of the Mooney twins. Then in 2018, Kim Draughan continued the series on Arpril 19th with a follow up event Legal Eyez 2, with headlining Hemp-Hop artist Zig Zag, of the legendary Arizona hip-hop group NB Ridaz. Vendors, artists and activists united to bring an eclectic variety of entertainment to over 100 MMJ supporters.

More on Amzeal News
This year the two are collaborating to bring the reinvented LEGAL EYEZ'D 3 which will have an open air entertainment and shopping experience filled with "smoketivities, food, and giveaways ,held at the Support District Radio station /Creative spaces,1950 E Watkins in downtown Phoenix. Your hosts are AZKimistry and Queen Ladie Purm of DimeWrap.com teaming up with Comedian Big Baby as they "blow your mind" to the clouds! This years event organizers expect over 250 guests to attend this event. The Legal EYEZ'D 3 concert will have opening acts while the official Arizona state Ruff Ryder DJ SupaNovaG4 spins all the greatest 420 friendly music of multiple genres. Most recently confirmed live entertainment will also include special guest speakers, comedians, and performances by hip-hop and "popstract" artist ATM the Professional as well as acoustic performance by MysticBlu featuring her Bob Marley tribute and more performances to be announced. The evening ends with the headlining performance by legendary hip-hop group The Luniz whom are expected to perform their legendary hit single "I got 5 on it" during their stage set.

More on Amzeal News
Draughan Enterprises LLC,with divisions whose focus is Hip-Hop and hemp entertainment divisions dubbed ad "hemp-hop,", has joined with non -profit organization and Golden Phi Charities and are excited to bring LEGAL EYEZ'D 3 Music festival and Outdoor Marketplace to the valley of the sun.

Advanced general admission tickets are available for purchase now on www.eventbrite.com limited Vendor spaces are also still available. To find out how you can be apart of this growing brand and event, please contact Brandi or Kim at 888.933.3361 ext 802